A Better Option for Pain and Musculoskeletal Dysfunction

How to Leave Dr. Ordinary Behind

Hands-on loading of soft tissue has proven to be much more than just increasing circulation or relaxing tense muscles, as important as those benefits are. Most of the literature on mechanical load demonstrates that cells detect mechanical deformation as tension, compression, shear or fluid flow. There are receptor connections between the outside and inside of the cell, linking to signaling pathways that convey mechanical stimuli information to the nucleus.1 Receptors are able to convert mechanical energy into chemical stimuli that can be conducted inside the cell. Past soft tissue articles in this journal have given evidence of pressure on tendons causing a proliferation of fibroblasts and initiation of an inflammatory cascade, resulting in the laying down of new collagen along the normal lines of stress. An often-overlooked benefit of soft tissue loading is the piezoelectric effect.

The Curie brothers discovered the piezoelectric effect in crystals in 1880. Piezoelectricity literally means, "pressure electricity." Crystalline arrangements are the rule in living tissue,2 not the exception. These crystals are piezoelectric, meaning they generate electric fields when compressed or stretched. When a bone or cartilage is compressed, or a tendon or ligament stretched, or when skin is stretched, electric pulsations are created. The colloidal gel component of soft tissue, which makes up the ground substance that embeds all of the connective tissue/collagen in the body, is influenced by electrical fields. These electric fields are one of the factors that influence the gel-to-solvent (melting) transition.3

Remember, fascial release causes the thixotropic gel to change to a liquid form, allowing the dehydrated gel to expel its toxins and return to the normal gel state, where freedom of motion is re-established. Proteins, nucleic acids and mucopolysaccharides, which compose all tissues of the human body, exhibit piezoelectric properties. This piezoelectrically induced current activates the healing processes in the stimulated area. Thus, this mechanically induced electrical energy has great regulatory effect on the cellular and molecular levels.4 Tissue loading, causing a deformation of collagen, increases the negative charge in soft tissues. These negative potentials have a strong proliferative impact on the tissues in the loaded area.4 A present-day method for treating slow-healing fractures is the use of piezoelectricity. This causes an increase in osteogenesis.

Facade and Yasuda5 found that the electrical behavior depended on the shearing of collagen fibers past one another, and that the maximization of the signal occurred when the fiber axis was at 45 degrees with respect to the axis of compression. The use of Graston instruments on soft tissue has always been recommended at a 30-60 degree angle. Again, maximum piezoelectric stimulation at 45 degrees should be considered. (Figure 1). 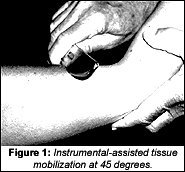