One of the most interesting aspects of soft tissue work is the variety of methods that have been developed over the years. Just as in the use of osseous methods, practitioners tend to use particular techniques and get comfortable with their results. Unfortunately for me and many of you out there, we suffer from the same ailment: eternal frustration syndrome (EFS). It makes you ask yourself, "Why didn't that patient get well as I expected him/her to? Is there something out there I should know that will help improve my results that I'm not doing?" The joy of practice is in the journey of learning to become a more understanding and proficient practitioner to help more people get and stay well.

Somatics is a technique that I recommend for placating your EFS. Somatics is a system of neuromuscular reeducation based on the work developed by Thomas Hanna, PhD.1 Hanna was influenced by the ideas of Moshe Feldenkrais, a pioneer in the field of sensory-motor learning. Jim Dreaver, DC, who studied with Hanna, adapted the somatic method to the chiropractic model and wrote a recent text on the subject.2

Stress (overuse) and injury cause a reflexive (involuntary) tightening of our muscles. If the tightness becomes chronic, these reflexive muscular contractions emanating from the brain stem and cord persist and eventually become habituated (chronically tight). Due to involuntary control and our inability to relax these areas we develop what Hanna called sensory-motor amnesia (SMA), resulting in pain, stiffness, reduced range-of- motion, vertebral subluxations, fatigue and increased susceptibility to injury. The goal of somatic technique is to reawaken normal sensory-motor or cortical control of the muscles. Dreaver states in his text2 that the ability to voluntarily contract or relax a muscle is directly dependent on the degree to which the muscle can be sensed or felt.

The somatic technique can be explained with the upper trapezius muscle, a commonly chronic tightened area of our body often associated with cervical pain and headache. First, a patient concentrically contracts the upper trapezius as far up as possible against a resistive force of 5-15 pounds applied by the practitioner (see Figure 1). Have the patient close his eyes during contraction to isolate the muscle, develop a conscious feeling of its tightness and give strong sensory feedback to the brain. The patient contracts for 3-5 seconds. Since the sensory neurons in the cortex merge directly into the motor neurons, if you increase sensory input, you automatically gain increased motor control.

Next, have the patient lower the shoulders a third of the way down as they continue to maintain pressure against your hands. They are now performing an eccentric contraction. Next, immediately have them concentrically contract (shortening) about 1-2 inches; then the trapezius is lengthened (eccentrically contracting against the practitioner's resistance) by another third, contracted a little, and then lengthened the final third (see Figure 2). Both types of contraction are enhancing the awareness of the muscle. The golgi tendon and gamma pathways are being activated. 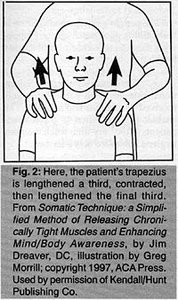 After the muscle is fully lengthened, perform a final contraction by having the patient bring the shoulders all the way up for about three seconds and then have patient quickly release the shoulder to a fully lengthened position (again stimulating strong sensory input which results in better motor function). Finally, with the patient's shoulders down, the practitioner grasps the patient's elbows from behind and pushes up while the patient is asked to push their elbows down. This stimulates the antagonists (lower traps and latissimus dorsi), allowing increased relaxation of the upper traps and "reminding" his/her sensory cortex that this is where the shoulders are supposed to be, so a new sensory engram (learned pattern of movement) is occurring in the cortex.2 Repeat the above procedure again. Finally, you might knead the muscle for a few seconds to increase the patient's proprioceptive awareness. This method empowers the patient to facilitate change from within.

Somatic technique is an excellent soft tissue technique for removing chronic muscle tightness, helping patients to become more aware of their bodies, allowing subluxations to be more easily reduced and (as a method of treating the paraspinal soft tissue) to prevent the subluxation from reoccurring.