Superior Cluneal Nerve Entrapment -- An Overlooked Cause of Low Back Pain

Evaluation of soft tissue often reveals nerve entrapment distal from the spine. When this occurs, we may find that the vertebral subluxation that we think is the cause of the referred pain is not directly related to the patient's pain. Complaints of pain over the medial portion of the iliac crest and in the gluteal or lumbosacral area are often diagnosed as a facet syndrome, lower lumbar disc problem or an iliolumbar syndrome (involvement of the iliolumbar ligament). 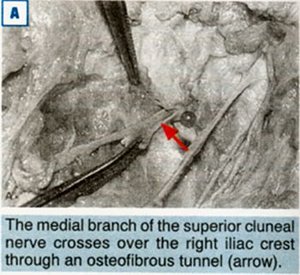 B. A diagram showing the site of the osteofibrous tunnel for the medial branch of the superior cluneal nerve.

If this pain location was due to a facet syndrome, the facet affecting the superior cluneal nerves would be at the level of T12, L1 or L2, whose nerves come out through the lumbosacral fascia at the lateral origin of the sacrospinalis muscles and cross over the dorsal part of the posterior iliac crest.2 Pressure over the particular facet involved might be sensitive if it was a facet syndrome, and the area would hopefully be relieved if the involved facet were adjusted. The trigger point involved at this area is supposed to correspond to the insertion of the iliolumbar ligament, except for the fact that the insertion of the iliolumbar ligament is on the anterior aspect of the iliac crest and cannot be palpated.3 However, treatment of a trigger point in the area may offer relief due to its effect on the cluneal nerve.

The medical branch of the superior cluneal nerve might be restricted in its osteofibrous tunnel against the iliac crest, just as osteofibrous tunnels affect other nerves such as the tarsal tunnel or carpal tunnel syndrome, among others. Active release should clear up the problem. The area will palpate as thickened, tender tissue, and there might be a positive Tinel's sign. The adhesion affecting the nerve could be freed by using pressure over the area as the patient (in the side position) actively flexes the thigh. Due to the entrapment in the fascial layers, the fascia should first be palpated as to the direction of the fascial barrier, which will determine the direction of the tissue pressure.