It has previously been assumed that if, for example, a muscle is an external rotator it can be tested in any plane in the direction of external rotation. The problem with this concept is that depending upon the position of the arm, i.e., the dependent position along the side of the body or at 90o abduction, or whether the arm is in a saggital or frontal position, different sets of related muscles are active and also acting as external rotators. For example, if you tested the subscapularis (an internal rotator) with the patient's arm at their side and their elbow flexed 90o with their forearm facing forward in the sagittal position, the pectoralis major would be from an EMG measurement more active than the subscapularis. Testing external rotation in this position would be activating the posterior deltoid almost as much as the infraspinatus and teres minor.1

Jenp et al.,1 reasoned that if possible, why not test rotator cuff muscles in positions where they are as isolated as possible from other cuff muscles and the larger surrounding shoulder rotators.
They used EMG activity which expresses the electrical activity of muscles. It is thought that a muscle will not fire without EMG activity and the more it fires the more EMG activity you get. Therefore EMG activity is a reasonable measure of isometric muscle force.2 If we tested external or internal rotation force which included more of the larger shoulder muscles, we would feel more resistance from the patient than if we position the patient and test the specific muscle when it is most active (EMG) with the least assistance from its synergistic muscles. 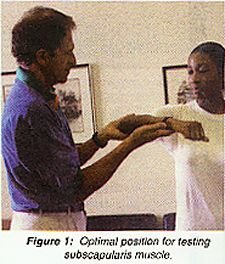 They found that the best position for isolating the subscapularis, especially from the pectoralis major was with the arm elevated to 90o in the scapular plane (approximately 30 to 45 degrees anterior to the coronal plane) with the arm in the neutral position (midpoint between full external rotation and full internal rotation). (See figure 1). Notice that the examiner in these tests supports the limb with his hand and asks the patient to relax as much as possible to perform a pure rotation without the influence of gravity. Gravity is eliminated because it acts as another force that may influence associated muscles. Figure 1 shows the patient pressing down (internal rotation against the resisting examiner's fingers).

The best position for the infraspinatus and teres minor which isolates them in particular from the posterior deltoid and supraspinatus was in a sagittal plane in 90o of elevation with the forearm at the midpoint between the neutral position and full external rotation (see Figure 2). The authors stated that they were unable to find a position that isolated the teres minor from the infraspinatus muscle.


Isometric force generation is greater at the end range because it is aided by the tension created in the capsule and ligaments. Most of the activity of the cuff muscles occur in the midranges where the capsules and ligaments are more lax.1 The cuff muscles are the primary shoulder stabilizers when the shoulder is in the midranges. It has been thought that a muscle that does not express definite weakness or pain can be tested in a stretched position where the EMG activity is less, but in the stretched position an elastic recoil is set up increasing the force. According to Malanga2 it's like stretching a rubber band and the muscle will recoil without having to fire. To test a muscle for subtle weakness it may be more effective to test in its shortened position.