I recently read an article about rehabilitating Achilles tendinosis1 that might apply to the rehabilitation of other tendons, such as the wrist flexors and extensors that are involved in the elbow tendinopathies. I am currently applying a particular exercise to elbow patients that has been proven successful for Achilles tendinosis. Traveling around the country lecturing on the subject of soft tissue has put me in contact with many fine DCs who are constantly studying and attempting to improve their results. Many of these DCs also read this column. I hope we can all attempt to use this particular exercise for our elbow cases - either medial or lateral epicondylopathy- and report on the results via my e-mail or Web site.

First, let's discuss the reasoning behind the experiment. Achilles tendinosis of the midportion of the tendon is a well-recognized syndrome with characteristic morphological features, such as changes in collagen fiber structure and arrangement. The collagen fibers are thinner than normal and separated by large mucoid patches, vacuoles and increased vascularity.2 Tendinosis is recognized as a degenerative condition with a lack of inflammatory cells. As we all have "tennis elbow" cases that are sometimes difficult to resolve, we should realize that an overuse tendonitis, by definition, has full recovery in several days to two weeks, while an overuse tendinosis may require two to six months for full recovery.2 This particular exercise may speed up our results.

Alfredson, et al.,1 used heavy-load eccentric calf-muscle exercises on 15 patients with Achilles tendinosis who were on a waiting list for surgery. Conventional treatments on these patients, including "rest, change of shoes, NSAIDS, orthoses, physical therapy and ordinary training programs" were not effective. The patients performed a eccentric exercise consisting of three sets of 15 repetitions, performed twice a day, seven days a week for 12 weeks. The exercise was performed by each patient standing with the ventral half part of the foot at the edge of a stair in plantar flexion, and then lowering the heel below the lever.

The major modification in performing this type of eccentric stretch was that each patient used enough weight to experience pain. When pain was no longer experienced, heavier weights were added to a backpack to recreate the ankle pain. Only one of the 15 patients required surgery, and after four years, 14 patients were satisfied with the treatment. In the authors' last 100 patients with the same Achilles problem, only 10 required surgery, leading to the hypothesis that this technique was successful because there was hypertrophy and increased tensile strength in the tendon; the stretching lengthened the muscle tendon unit, resulting in less strain during ankle joint motion, and since the exercise was painful to perform, there may have been "some kind of alteration of pain perception from the tendon."

In tendinosis, there is neovas-cularization that may be the body's attempt to heal itself. The authors thought that the neovessels and their accompanying nerves might also be a source of pain in tendinosis. Using Doppler during the eccentric exercise, the authors found that the flow in the neovessels disappeared when the ankle joint was in dorsiflexion. In another study, they injected a sclerosing agent in the area of the tendon with neovessels; after six months, eight of 10 patients were pain-free and had no neovessels outside or inside the tendon. According to the authors, follow-up controlled studies are needed.

As I write this article, I have eight patients - seven with lateral epicon-dylosis and one with medial epicondylosis - performing the painful eccentric exercise. I have them use a weight that first creates minimal pain - usually 5-10 pounds, depending on the patient's muscle strength and initial presenting pain. They perform the same recommendations outlined for the Achilles tendon. As soon as the pain diminishes, usually after a week or so of eccentric exercise, I will have them increase the weight to the original pain level again. There is evidence that eccentric exercises are more effective than concentric exercises.3 If a patient finds the concentric exercise painful to perform, instruct him or her to lift the wrist back to the neutral position, so that only eccentric activity is performed.

For doctors who would like to participate in this experiment, it is important to have each patient sign an informed consent agreement before performing this painful stretch, which could possibly aggravate their condition. A functional examination that stresses the patient's wrist extensor muscles from the lateral epicondyle (painful resisted wrist extension) with the elbow in extension should be performed.4 Resisted wrist flexion with the elbow extended is a test for the muscles originating off the medial epicondyle. The figure below depicts the wrist being lowered from the neutral position to eccentrically stretch the wrist extensors. The patient's forearm should be resting on a table with the wrist hanging off the edge, allowing full wrist flexion (lateral problem). Full wrist extension (medial problem) eccentrically contracts the forearm flexors 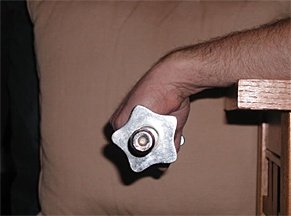 A problem with this type of experiment is that everyone's technique of treatment will vary. Some doctors will use only ultrasound, fascial release, active release, or Graston technique - or a combination. Regardless of what technique you use, based on your experience, try to determine if this type of exercise stimulates healing in less time than usual.