Normal scapular motion increases joint stability by placing the glenoid fossa under the humeral head. It is necessary that the instant center of rotation is maintained between the glenoid and humeral head, helping to create a concavity compression so that the humeral head does not shift in the glenoid fossa during shoulder elevation. Without the maintenance of congruent joint stability, excessive humeral motion will create increased tensile stress on the capsular ligaments and cuff muscles, resulting in excessive stretch during overhead shoulder motion and eventual instability.

With instability, a traction stress develops, resulting in early fatigue and eventual degeneration of the rotator cuff. When the cuff muscles fatigue, the stronger deltoid causes the humeral head to migrate superiorly, creating a subacromial impingement. Eventual tendinopathy and rupture may ensue. What is often not realized is that if the lower trapezius and serratus anterior muscles get fatigued, normal acromial elevation during shoulder elevation may not occur, contributing to subacromial impingement. The acromion will not be able to get out of the way with arm elevation. Most nonphysiologic motion and thus abnormal mechanics that occur with the scapula can be traced to alterations in the function of the muscles that control it.2

Kibler3 devised the scapular assistance test to determine whether impingement is due to a lack of active acromial elevation. A significant impingement sign is a painful arc between 60 degrees and 130 degrees upon actively or passively elevating an arm, indicating that something in the subacromial space is being compressed and irritated. Muscle testing of a single cuff muscle may appear weak due to pain along with clicking and symptoms of impingement.4 The scapular assistance test may normalize these impingement signs indicating that dysfunction of the scapular is related to the impingement syndrome. The examiner (see Figures 1 and 2) pushes the inferior medial border of the scapula laterally and upward while stabilizing the upper medial border of the scapula to simulate the serratus anterior/lower trapezius muscle portion of the elevation force couple, as the patient elevates the arm in the scapular plane. If the impingement is related to these muscles being inhibited, the impingement symptoms will diminish or be abolished. 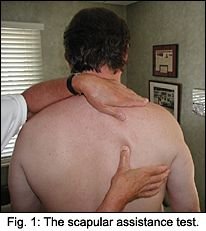 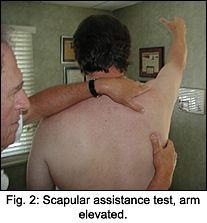 For example, with the assisted scapula held in a normal position (as if the scapular muscles functioned normally), a patient will experience less pain during the elevation, or a painful arc will no longer be present as the patient elevates the arm. While the arm is elevated 90 degrees during the test, retesting the supraspinatus, for example, might exhibit less pain and more strength. The test, in effect, gets the acromion out of the way by keeping the scapula back and down instead of allowing it to go over and up causing pain. This test would also eliminate the possibility that an external impingement such as a hooked acromion was causative. Rehabilitation should then emphasize strengthening of the upper and lower trapezius, rhomboids and serratus anterior muscles. Next, rehabilitation should be directed to the rotator cuff muscles.