It is established that, especially in the treatment of tendinopathies, "the focus of any conservative management program should be to encourage collagen synthesis, maturation, and strength."1 Therefore, any method, especially if it is a drugless, conservative manual method, that can integrate old and new collagen contributing to the final stability of the extracellular matrix (ECM), deserves our attention.

Collagens are the major macromolecules of most connective tissues and are the most abundant (30 percent) structural proteins in the body.2 There are at least 25 different types of collagen, but the most important ones regarding soft tissue are the fiber-forming types I, II, III, V and XI, with types I, II and III being the most significant regarding manual loading. Type I collagen fibrils comprise between 80 percent and 90 percent of total body collagen and are the principal structural elements of skin, bone, tendon, ligament, fibrocartilage and fascia. Type II is located mainly in hyaline cartilage. Often, the collagens are combined. One of the functions of type III collagen is to form cross-links rapidly in wound-healing in the presence of type I, although type III is not found in mature bone and tendon fibrils.2

The ground substance of the body is called the extracellular matrix (ECM). This is a hydrated gel made up of glycoaminoglycans, proteoglycans, glycoproteins, fibrous collagen fibers, and cells such as fibroblasts, fat cells, and at times, other cells such as macrophages, lymphocytes, plasma cells and mast cells. What is most interesting is that the fibroblast produces the extracellular matrix of connective tissue. The type II collagen found in cartilage is produced by chondroblasts, and the type I collagen in bone is produced by osteoblasts and in teeth by odontoblasts. These cells are specialized forms of fibroblasts, which, as alluded to above, produce the type I collagen found in tendons, ligaments and fascia.

The subject matter of the ECM and collagen is voluminous, and science has proved that mechanical load influences the structure of soft tissue, especially by stimulating fibroblasts.3 Gehlsen3 proved that the more load applied, the greater the increase of fibroblasts. This study demonstrates the importance of deep-friction massage, Graston Technique and eccentric exercise.

As Katie Lundon, PhD, states,4 "The purposes of therapeutic loading of connective tissues are to immediately affect neurobiologic receptors, in addition to the more long-term synthesis of proteoglycans and collagen by fibroblasts; as well as to improve the motion of collagen fibers; and to prevent the development of anomalous cross-links between fibers and other macromolecular elements of the ECM."

Exercise, especially eccentric exercise, recently has been shown to increase the synthesis of collagen. In 2004, I wrote an article for Dynamic Chiropractic5 that referred to a study by Alfredson, et al.6 In the study, 15 patients with Achilles tendinosis who were on a waiting list for surgery performed heavy-load eccentric calf-muscle exercises. Conventional treatments on these patients, including "rest, change of shoes, NSAIDS, orthoses, physical therapy and ordinary training programs," were not effective.

The patients performed an eccentric exercise consisting of three sets of 15 repetitions, performed twice a day, seven days a week for 12 weeks. The exercise was performed by each patient standing with the ventral part of the foot at the edge of a stair in plantar flexion, and then lowering the heel below the lever (Figure 1). The patient then lifted the heel with the other foot to prevent concentric contraction (Figure 2). Each patient also wore a backpack with 20 percent of body weight, creating Achilles pain. As the pain diminished, backpack weight was increased to re-create the painful eccentric contraction. 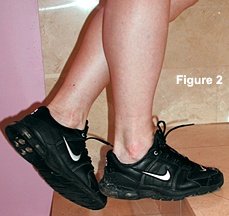 When this article was written in 2004, the concept of healing by eccentric contraction of the degenerative tendinosis, causing decreased thickness of the Achilles tendon, was thought to be due to a reduction in neovascularization. It was thought that tendinosis, defined by vessel ingrowth into the mid-portion of the Achilles tendon, and associated with increased amounts of interfibrillar glycosaminoglycans and changes in the collagen structure and arrangement, was normalized, allowing a normalization of fiber arrangement. The reason for this "normalization" was not clear until recently.

But why not do both?