The "Yips" When Putting May Be Due to Scar Tissue

An interesting article in the sports section of the New York Times1 blamed the "yips" on the buildup of scar tissue in the forearms.

The yips represent a nervous / tension reaction while attempting to make a short putt in golf and has been defined as a motor phenomenon of involuntary movements.2 Most people blame it on psychological factors.

A sports biomechanics expert, Robert Anthony Prichard, said that he noticed some of the golfing greats, such as Snead, Hogan and Trevino, restrained their driver swing in order to return the club at impact to its original position; and that these golfers happened to suffer with the yips. Prichard theorized that these golfers "were gripping the driver very hard, so as to limit extension at impact. The driver head is going over 100 miles an hour through space and is pulling away from the golfer with 100 pounds of force. Even though this pull only lasts for a fraction of a second, it is repeated over and over again and it results in the tearing of hundreds of the tens of thousands of small individual muscle fibers that make up each muscle in the forearms." 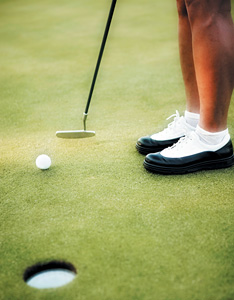 Prichard felt that the scar tissue created tension in the forearms and resulted in spasms when the golfer gripped the putter lightly due to activation of the same muscles. Of course, this concept is totally unproven and even children who play golf may have the yips without any real history of overuse scar tissue. Prichard recommended massage.

A Mayo Clinic study2 blamed the "yips" on a continuum from the neurologic disorder of dystonia to the psychological disorder of choking. Distinguishing between the complex neurophysiologic processes of anxiety and dystonia has not been proven.

But if scar tissue is the problem, let's see why it may be causative. Besides scar tissue (fibrosis) limiting motion due to its increased stiffness, pathological connective tissue affects function because of its sensory input. Fascia contains both numerous proprioceptive and mechanoreceptive receptors. While called muscle spindle cells, spindle cells (proprioceptors) are entirely within the fascia surrounding the muscle. Spindle cells influence motor control and muscle coordination. Restricted fascia in fibrotic areas may be responsible for abnormal firing of the spindle cells and lead to the "yips."

There are also mechanoreceptors, such as Ruffini and Pacinian corpuscles, within the surrounding fascia. Golgi tendon organs may be affected and are found mostly in the muscular portions of myotendinous junctions, in the attachment transitions of aponeurosis, in capsules, as well as in ligaments of peripheral joints.3 Ruffini receptors are midrange afferents that give information concerning joint angles and limb movements,4 and Pacinian corpuscles are very sensitive to acceleration and deceleration and are used as proprioceptive feedback for movement control (kinesthesia).5-6

The realization of the sensory input from connective tissue implies more possibilities for the effects of tissue manipulation, whether assisted (Graston Technique) or by manual fascial methods.