Many chiropractors either perform some type of massage on their patients or have a massage therapist in their office.

The term therapeutic massage (TM) is a general, nonspecific term referring to any type of massage, from superficial to deep, that may have a healing effect. Most massage therapists1 "train in multiple programs and therapies and there is high variability in the training programs and in what therapies practitioners choose to learn."2 Methods of massage include, among others, effleurage, petrissage, friction and tapotement. TM also can refer to most hands-on therapies including fascial manipulation, Graston, structural integration, active release, Swedish massage and others.

Claims regarding the effects of TM include changes in hormones, neurotransmitters, blood flow and cortisol, among others. However, as with most other mechanical pressure methods used on humans, there is a paucity of research supporting its efficacy, optimal treatment parameters and underlying physiologic responses.

Recent studies have added to the body of knowledge regarding the effects of mechanical load, showing definite physiological and clinical changes2-3 related to TM. An important effect of TM is thought to be its effect on peripheral blood flow. While skin temperature correlates with skin blood-flow studies, skin probes and their effect on the skin are questionable.4 A recent study using dynamic infrared thermography2 compared the effects of a 20-minute massage that included a deep muscle combination of friction, gliding (effleurage), kneading (petrissage), direct pressure and passive stretching to the neck and shoulders versus light touch (just the hands placed in contact with the skin) or a control scenario in which the patient rested quietly in the treatment position. 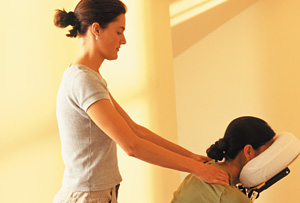 Light touch produced some changes in temperature, but the most significant changes occurred with the deeper massage treatment. What is most interesting is that the areas not massaged (posterior right arm, C6 to C8 dermatomes, and thoracic middle back T1 to T8 dermatomes) showed an increase in skin temperature and peripheral blood perfusion similar to the areas massaged, indicating a possible neural as well as a circulation component. The areas receiving a deeper massage showed increased temperature for 35 minutes and remained above baseline levels after 60 minutes.

One of the effects of deep massage is temperature elevation that changes hyaluronic acid molecules, which are responsible for the gel phase causing tissue restriction. The increase in temperature with associated pressure changes the gel to a fluid phase and creates the necessary tissue sliding. One study found that massage to a depth of between 1.5 cm and 2.5 cm caused changes in muscle temperature significantly greater than ultrasound.5

Some of the same authors of the above study submitted another significant paper on deep massage that recently appeared in Manual Therapy.3 This study compared the same three groups as the previous study: deep massage and light touch over the neck and upper trapezius areas, along with a control group. This time, the authors measured flexor carpi radialis α-motor neuron pool excitability (Hoffmann's reflex, otherwise known as the H-reflex), electromyography (EMG) signal amplitude of the upper trapezius during maximal muscle activity, and cervical ROM to help assess physiological changes and clinical effects of deeper massage compared to light touch.

The H-reflex is similar to the stretch reflex (knee jerk reflex), but differs in that it bypasses the muscle spindle and is used to assess monosynaptic reflex activity in the spinal cord. Electrical stimulation causing the H-reflex measures the efficacy of synaptic transmission as the stimulus travels along the Ia fibers, through the dorsal root ganglion, and is transmitted across the central synapse to the anterior horn cell, which fires it down along the alpha motor axon to the muscle. This measurement can be used to assess the response of the nervous system to various neurologic conditions, musculoskeletal injuries, application of therapeutic modalities, pain, exercise training, and performance of motor tasks.

In this study,3 even though the upper trapezius area was massaged, the H-reflex for this area is difficult to elicit, so the authors checked the motor neuron pool excitability in an outlying area that was not massaged: the flexor carpi radialis muscle (FCR), which generates a reliable reflex. They reasoned that massaging the trapezius and neck area would affect the cervical and brachial plexus and the median nerve, which innervates the FCR.

The H-reflex test did show a decrease in FCR α-motor neuron pool excitability compared to the light-touch and control groups. The fact that there was a decrease in neuron excitability in a non-massaged area suggests the possibility that massage was producing a centralized effect on the nervous system, affecting spinal-cord response in another area. This same neuronal possibility was expressed in the change in peripheral blood perfusion in non-massaged areas in the previous study.2

Another finding was the decrease in EMG signal amplitude in the upper trapezius muscle with deep massage, which did not occur with light touch or control. The EMG change was probably due to the decrease in -motor neuron pool activation, which has an influence on electrical activity. Additionally, compared to light touch and control, deep massage increased ROM in all cervical directions.

One caveat is that all of the studies were performed on people without known pathology, but the neurological implications of deep massage affecting circulation and the nervous system are important. The fascial manipulation hypothesis is based on the release of restricted fascia that houses mechanoreceptors and proprioceptors, thereby influencing the CNS' effect on myofascia.

Everyone who seriously uses deep massage is aware of positive changes. Science may finally be proving why there are clinical results.

Next Article in Issue
Previous Article in Issue
Join the conversation
Comments are encouraged, but you must follow our User Agreement
Keep it civil and stay on topic. No profanity, vulgar, racist or hateful comments or personal attacks. Anyone who chooses to exercise poor judgement will be blocked. By posting your comment, you agree to allow MPA Media the right to republish your name and comment in additional MPA Media publications without any notification or payment.
To report inappropriate ads, click here.