random has many synonyms including chance, haphazard, arbitrary and unsystematic.' />

Why you should avoid random treatment of trigger points (part 1).

An orthopedic friend recently saw a patient of mine. He felt an injection of a trigger point (TP) at the upper trapezius and surrounding areas was necessary, since that was the patient's area of chief complaint and there was a tender, radiating nodule.

I told him I hoped the injection would help, but I did not feel random treatment of a local area of pain would necessarily treat the cause of the problem. After all, the word random has many synonyms including chance, haphazard, arbitrary and unsystematic.

One of the problems in dealing with local functional pain is that the area of complaint is not necessarily the causal location. The sage statement by Karel Lewit, MD, a leader in the soft-tissue movement, went something like: He who only treats the site of pain is lost. An important question is: Could this painful site be a compensation for an original problem elsewhere? Could it be that a chronic low back pain is really a compensation for a sprained ankle 10 years ago? Could a shoulder or elbow pain that occurs for no apparent reason be due to a wrist fracture that occurred when the patient was 5 years old?

Alleviating a painful point may relieve symptoms, but have nothing to do with causation; and as many of us find, the points and symptoms will recur. The pain that "appears for no apparent reason" is often the clue that should make you think of other areas.

Could a more organized method of treating these tender points help the patient for longer periods of time, or for that matter, completely cure the problem? Travell and Simons told us about these hyperirritable areas of taut bands that may radiate to particular areas. They were talking about the myofascial pain syndrome and trigger points. Of course, many of the points that have to be treated do not have to fit the definition of a TP. 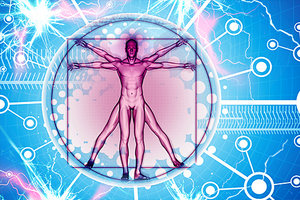 In their text, Travell and Simons offer no description of the chief connecting part of our body, the fascial system. They rarely mention TPs that may originate in fascia.1 They quote Kellgren,2 who, after injecting saline solution in the fascial epimysium of the gluteus medius, realized referred pain several cm. distally. Travell identified mostly muscular areas to treat, but of course, Travell's text was written in 1983, and Killgren found the epimysial point in 1938.

The works of Travell and Simon have provided a great contribution to the world of soft tissue. They astutely reported that myofascial referred pain did not follow dermatomal, myotomal or sclerotomal patterns of innervation. Areas of referred pain can be important in our analysis of where to treat. Treating a knee area may refer to a leg area requiring treatment; it may refer to an antagonistic area requiring treatment; when it refers to the area of complaint it is regarded as a very significant possible causative area and may indicate the most important fascial chain (read below).

Connective tissue has its own system of pain referral that may or may not be tied up with the central nervous system. When mechanical load is applied to abnormal soft tissue, the area of referral is in a non-segmental pattern. There are a variety of hypotheses to explain it, such as the "connective tissue theory"3 and the "barrier-dam" theory.4

The latter theory states that afferent sensitive increased nociceptive peripheral nerves might become entrapped in local restrictive areas, causing hyperexcitation of nerves between the distally referred pain area and the local muscular zone of tenderness. "The primary pathogenesis of referred muscle pain is likely to be a peripheral sensitization with additionally a central modulation and not vice versa."4

Giamberardino5 states: "Referred pain / hyperalgesia from deep somatic structures is not explained by the mechanism of central sensitization of convergent neurons in its original form, since there is little convergence from deep tissues in the dorsal horn neurons." The absolute cause of non-segmental pain referral is still not entirely known. It is thought that even changes in cell shape and forces among cells can affect adjoining cells and transmit information. Stretching the fibroblast could be supplying information by way of gap junctions to other fibroblasts, transmitting information about pain and peripheral motor coordination.

Chen6 states that neurological (electrochemical) transmission is slower, localized and context independent compared to mechanical force distribution. Coordination by mechanical force distribution is faster, both locally and globally; and above all, occurs in a context-sensitive manner. Therefore, it is possible that stressing a specific region of the deep fascia can be transmitted over a distance by cell-to-cell communication.

Abbott, et al.,7 theorize that connective tissue (CT), especially fibroblasts, are part of a whole-body, cell-to-cell, communication-signaling network. They state that fibroblasts exhibit active cytoskeletal responses within minutes of tissue lengthening. Analogous cell-to-cell signaling involving calcium and/or ATP may exist within CT and may be accompanied by active tissue contraction or relaxation. "One can envisage a whole-body web of CT involved in a dynamic, body-wide pattern of cellular activity fluctuating over seconds to minutes reflecting all externally and internally generated mechanical forces acting upon the body."7 The chief cell in the fascia is the fibroblast.

According to the literature, it appears that treating particular related fascial points is more effective than just treating random painful sites. It was found that in treating plantar fasciitis, results were better if the gastrocnemius / soleus) trigger points and heel region were treated, rather than the heel region alone.8

Most of us are aware that a variety of points must be treated when using soft-tissue methods. The questions that must be answered in this regard are:

Editor's Note: Dr. Hammer addresses these questions and continues his discussion of trigger points in part 2 of this article, scheduled to appear in the March 15 issue.