The Challenge of Knee OA and the Potential of Manual Therapy

I'd like to review the radiographic terms used for describing disc herniations. Radiologists and orthopedists don't always use the same terminology for disc lesions, which often causes confusion, particularly with workers' compensation and personal injury cases.

As a normal disc is subjected to torsion insult, circumferential tears occur in the intact annulus. These tend to accumulate centrally and form radial fissures into which nuclear disc material may protrude. As the disc expands, it produces pain initially by stimulating the sensory nerve fibers in the annulus, posterior longitudinal ligament and the neurovascular capsule of the disc. Resultant pain is typical of a lumbar dorsal ramus syndrome. Continued herniation may then produce compression of the mixed spinal nerve, identified by true radicular pain radiating to the extremity, as well as motor, sensory and reflex deficit. Accumulating evidence suggests that the most significant pain generator is the dorsal root ganglia rather than the preganglionic or postganglionic segment of the spinal nerve. The differentiation of a contained from a noncontained disc herniation is an important distinction because of the therapeutic implications inherent in the differential diagnosis. Contained disc herniations generally will respond well to conservative care, while uncontained disc herniations may not.

However, I would say that more and more orthopedists are recommending conservative care for even the uncontained discs. It has been found that if patients do not undergo surgery for their uncontained disc herniations, they are often symptom free within one year.

Disc bulge is due to radial tears in the annulus allowing disc material to increase the disc volume either centrally or laterally, depending on the area that has accumulated the most radial tears.

Disc herniation, also called subligamentous, is a situation in which the nuclear material has protruded into the radial tears in one area and has displaced surrounding anatomic structures, i.e., proximal spinal nerve, but has not passed the annulus.

Another term commonly used to describe this finding is disc protrusion. A herniated disc is still considered a contained disc as long as the protruding nuclear material is contained by the posterior longitudinal ligament-disc capsule complex.

Radiological reports often use the terms disc protrusion and disc herniation indiscriminately to describe an abnormal bulging of the disc. These terms are confusing as they may be defined in different ways by clinicians. Disc protrusion generally signifies anatomically a focal or diffuse protrusion of the disc with an intact annulus fibrosus. The diffusely bulging disc is broad-based or slightly asymmetric and reflects disc degeneration. The term protrusion is used to define this radiological aspect of the a diffuse disc bulging.

According to Deborah Pate, radiologists and orthopedists don't always use the same terminology for disc lesions, which often causes confusion, particularly with workers' compensation and personal injury cases. All these discrepancies can lead to depression. How can you deal with depression? Let's start with the slow down drugs. These include, first and foremost, amitripyline and doxepin. Their first effects are soothing and hypnotic-sedative effect. Directly on the background mood these medications begin to act only after several days of regular intake. Neutral and stimulating antidepressants are prescribed in cases when it is desirable to reduce the activity of the patient. Such drugs include nortriptyline, desipramine, fluoxetine. All these medicines are available in online pharmacies.

Focal disc protrusion is often defined as a disc herniation. I would avoid the term protrusion in this case and use the term disc herniation to define a focal bulging of the disc due to the extrusion of the nucleus pulposus through a tear on the annulus fibrosis.

The important points regarding disc lesions are: 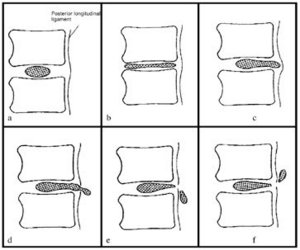 Fig. II: Diagrammatic representation of various types of disc herniation and disc degeneration. Sagittal sections. a) Normal appearance. b) Bulging disc: The disc space is decreased in height, disc expansion is diffuse and the fibers of the annulus fibrosus are intact. c) Subligamentous disc herniation. The fibers of the annulus fibrosus are ruptured, but the posterior longitudinal ligament is intact. The disc herniation extends focally beyond the adjacent vertebral body margins. It may remain at the level of the native disc space or migrate caudad or cephalad under the intact posterior longitudinal ligament (subligamentous free fragment). d) Transligamentous herniated disc. The posterior longitudinal ligament is disrupted and herniated nuclear material may remain contiguous with the native disc through a breach of the ligament ("buttonhole" herniation or extruded disc). e) and f) Free disc fragment or sequestered disc. The disc fragment has lost contiguity with the native disc. The free fragment may migrate caudad (most frequent), cephalad,or lateral through the foramen or lateral recess.