The Military Demonstration Project -- How Will Chiropractic Be Judged?

These five chiropractors, along with Richard Beachman, DC, a clinical professor at Palmer College of Chiropractic West, were part of a 13-member oversight advisory committee that included representatives of the general accounting office, the surgeons general of the three services, military retiree organizations, and the DOD. They hammered out the ground rules under which the demonstration project would operate, including patient access to chiropractic care, and how the results would be evaluated. They also determined the personal services contracts, acquisition of equipment, credentialing, patient screening criteria, and evaluation planning. After the fourth committee meeting and many hours of debate and discussion, the project was ready to move to the next stage.

The three services began recruiting for two chiropractors and two assistants for each demonstration site to serve as civilians treating military personnel and their dependents. In this regard, the chiropractic profession had little input, other than the DCs would be graduates from a CCE accredited chiropractic college and in practice for a number of years. (Please see "Military Moves on Chiropractic Demonstration Project," Dec. 2, 1994 issue).

Feasibility -- What are the implications of offering a new (chiropractic) service in the military health system? How can it best be done? Can it can be integrated into the "normal" functioning of the military without creating much change to the current system? Chiropractic brings new providers and a different philosophy of care. It is an "integration" question, according to the DOD, and for the military, the philosophical difference is at the "crux of the integration issue..."

The chiropractors participating in the CHCDP must comply with four sets of demonstration parameters:

"Deliver chiropractic services at each of the demonstration sites. In addition to providing acceptable levels of patient care, chiropractic practitioners and support staff will collect all data necessary for the evaluation of the Demonstration Program.

"Deliver chiropractic services in an efficient manner, using procedures which have been established as valid through chiropractic research and clinical practice.

"Comply with individual MTF (military treatment facility) bylaws and quality management procedures, including utilization review processes, and with the quality criteria established by the Oversight Advisory Committee. They must learn and follow military medical protocols dictated at their individual MTF, and must cooperate with all quality management and review procedures.

"Follow practice guidelines as established in the Guidelines for Chiropractic Quality Assurance and Practice Parameters: Proceedings of the Mercy Center Consensus Conference, Aspen Publishers, Inc., Gaithersburg, Maryland, 1992 (or its successor)."

Unfortunately, no money was allocated by Congress for this demonstration program. Each of the facilities have to bear the cost. Ten military sites where selected for the project in January. Since then, the surgeons general of the Army and Navy proposed that two of the sites be changed. In March, the oversight committee approved the change. The final established sites are:

While a randomized controlled trial of the efficacy of chiropractic care within the military setting was considered, it will not be a part of the demonstration design. After the program is underway, there may be an opportunity to select one site for this purpose.

Active duty members, active duty family members, retired members, and retired family members will be treated by the DCs in this program for spine-related neuromusculoskeletal disorders. Unfortunately, because of liability issues "patients 17 years of age or younger and female patients who are, or may be, pregnant are excluded from the demonstration. The Department recognizes that these parameter differ from those in typical chiropractic practice." 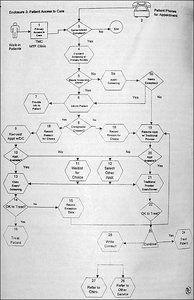 Chiropractic care will be put to the test. Each DC chosen for this demonstration project will bear an awesome responsibility to represent chiropractic in the most effective, cost-efficient manner possible.

The DOD directed the military departments to begin offering chiropractic care at the demonstration sites on Aug. 1, 1995. The project will continue until Aug. 1, 1998. Evaluation reports from the DOD will be provided to Congress on a quarterly basis, with a final evaluation at the end of the three-year project. The final report will give recommendations on the feasibility/advisability of continuing chiropractic in the military.

The future of chiropractic in the military rests on the results.