Addressing the Elephant in the COVID Living Room

Coronavirus Concerns: How to Enhance the Body's Resilience

This is the first article in a three-part series devoted to nociception, mechanoreception, proprioception and subluxation. These articles serve as introductions to topics that will be discussed in detail at MPI's Hawaii seminar in March of 1995.

When discussing subluxation with our patients, the great majority of DCs still describe it in terms of a bone-out-of-place that pinches or chokes nerves. There are two major problems with this explanation: It is inaccurate because subluxations rarely, if ever, pinch or choke nerves. Secondly, by repeating this erroneous explanation again and again, DCs eventually come to believe it. Repetitive exposure to information embeds in the mind.

How do DCs view subluxation? The first image that pops into many heads is a displaced vertebra or a black shoe on a green hose. Such a visual response regarding the subluxation demonstrates how we have programmed our minds to think in an unscientific and anti-intellectual fashion. This utterly demeans our profession. This way of viewing subluxation, more than anything else, serves as an indicator that we need to update our perspective about the science of chiropractic. We can either quickly change our views or we can become paranoid and self-defensive.

According to various gossip columnists in chiropractic, our profession appears to be currently enmeshed in a brutal civil war between BOOP (bone-out-of-place) practitioners and low back pain practitioners. It should be known that the BOOPers incorrectly call themselves subluxation-based practitioners. My experience has demonstrated that the BOOPers do not know enough about subluxation to call themselves subluxation-based chiropractors. We would all do well to not be subluxation-based in the BOOP sense. It should also be know that this so-called war is really an over-dramatized skirmish between vocal BOOPers and a theoretical group of anti-chiropractic DCs. I have yet to meet any of these anti-chiropractic DCs. Unfortunately, the BOOPers seem to think that those who do not embrace the totality of BOOP philosophy are merely non-BOOPers who are still very pro-chiropractic and appreciate the philosophy of chiropractic from a contemporary and nondogmatic perspective.

My impression is that both the BOOPers and non-BOOPers could be more subluxation-oriented in their approaches to patient care. In fact, many of us non-BOOPers are trying very hard to better understand the nature of the subluxation complex for the purpose of improving our diagnostic and therapeutic abilities. 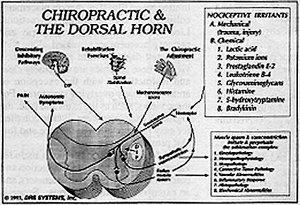 The term nociception is confusing to most practitioners. This is probably because we were taught this topic out of context in school, so our confusion is natural and should be expected. Nociceptors are located in nearly all spinal tissues except for the nucleus pulposus, the inner two-thirds of the annulus, and the articular cartilage of zygapohyseal joints. Nociceptors are specialized sensory receptors that are designed to receive tissue damaging stimuli, i.e., trauma and the subsequent release of chemical mediators of inflammation. Under normal circumstances nociceptors never respond to innocuous stimuli. On the other hand, mechanoreceptors are designed to receive innocuous stimuli such as light touch and normal joint motion. Mechanoreceptors are located in skin, muscles, ligaments and joint capsules. Clearly, there is a great difference between nociceptors and mechanoreceptors. Proprioception is another story and will be described in a future article.

A major misconception, held by BOOPers and non-BOOPers, is the presumption that nociception equates with pain. Nothing could be farther from the truth. Nociceptor irritation may result in pain, autonomic symptoms, muscle spasm and/or vasoconstriction. Pain is an emotional experience and does not correlate with the severity of tissue damage and/or nociceptor irritation. Pain, as an indicator of tissue dysfunction, should not be our sole focus, nor should its importance be de-emphasized, rather, pain should be understood. A basic point to understand is that pain is merely one possible outcome of nociception. Subluxations can develop without the experience of pain and thus, the symptom of pain is not necessarily required before an adjustment should be administered.

There are volumes and volumes written on nociception and chiropractors need to become well versed in this subject. If you are a BOOPer or a non-BOOPer and have not investigated the topic of nociception and subluxation, then here is a chance for both sides to agree on a basic tenet of chiropractic -- nerve (nociception) irritation -- and approach it from the science of the 1990s.

The second article in this series will describe how our food and thoughts can influence nociceptive activity. The third article will clarify nociception, mechanoreception and proprioception.