Rather than join the chorus of complaints, I set out to tackle the issue head-on and determine how to maximize efficiency and minimize overhead. To facilitate this process, I brought in a firm that could best be described as process-management consultants; they had worked previously with hospitals and other physicians' offices to determine the ideal way to streamline all of the steps necessary to successfully document, bill and get paid for the treatment of injured patients.

As most physicians who handle cases are well-aware, the amount of documentation, forms, reports and paperwork you need to keep up with can be quite onerous. While lecturing across the country to various groups of doctors, I've heard near-constant groaning about the difficulties of keeping up with the paper trail necessary in PI cases.

Rather than join the chorus of complaints, I set out to tackle the issue head-on and determine how to maximize efficiency and minimize overhead. To facilitate this process, I brought in a firm that could best be described as process-management consultants; they had worked previously with hospitals and other physicians' offices to determine the ideal way to streamline all of the steps necessary to successfully document, bill and get paid for the treatment of injured patients.

After an extensive review of every step in the processing of a new PI patient, from the intake forms to submitting a "clean" HCFA, we arrived at one glaring conclusion: A large percentage of the roadblocks were as a result of simple tasks that were being overlooked because they weren't the responsibility of any one employee.

After observing this, we began to address the problem by designating a staff member as our "New-Patient Coordinator." The new-patient coordinator is charged with ensuring that each patient has a smooth transition into the practice, and that no critical elements fall through the cracks. The initial phase of their job is to make sure the patient is escorted into our "New-Patient Room," which is warmly decorated, and given a bottle of water and a bag of dried fruit, almonds and dark chocolate. Rather than shoving a stack of forms at the patient and leaving them in the lobby to work things out, the new-patient coordinator immediately steps in if the patient appears to be having any difficulty accurately filling out the forms. 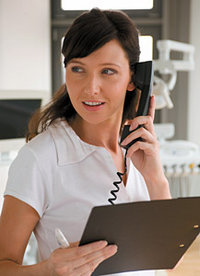 For example, in my experience, I've found that with PI cases in particular, some patients cannot read well or sometimes at all. Their lack of compliance with your intake forms may not represent defiance on their part, but rather embarrassment. We have found that in nearly all instances, a patient who left much of the paperwork blank responds favorably when simply asked the questions orally by the new-patient coordinator, who then records the answers on the form.

When the paperwork has been reasonably completed, one of our doctors then enters the room to perform the history and examination. The staff member stays in the room during this process for the safety of the doctor, as well as to record the examination findings. My examination time is cut in half when I can dictate positive test results to a staff member, rather than record them myself. It is well-worth the extra staff time to ensure our doctors are able to maximize their efficiency in the new-patient encounter.

Up to this point, the role of the new-patient coordinator is important, but not absolutely critical. However, once the patient leaves, the real value of this staff member's role becomes evident. We developed a spreadsheet with all of the critical steps represented. On the patient's first visit, their name is added to this list, and any steps that have not yet been performed are highlighted in green, with outstanding items colored in red. Key tasks include scanning completed intake forms into our EHR system, requesting previous medical records, faxing a request for a letter of protection to the patient's attorney, verifying the patient's insurance information and claim number, and entering the exam findings into the patient's record.

With this system in place, tracking the intake process becomes very easy. For example, there might be an instance in which the patient's medical records have not yet been requested from the hospital, or the request for a letter of protection has not been sent to their attorney. Without a system to track these things, it would be easy to overlook until three months (or more) into a treatment plan that a letter of protection wasn't on file or a critical insurance form wasn't signed by the patient.

In my practice, one glance at the new-patient spreadsheet reveals any missing items with glaring red cells, and these can immediately be handled. As new patients are added to the bottom of the list, it is very easy to avoid an important step slipping through the cracks, since it's very obvious if something has gone a week or two without being completed.

As you can see, when you have the right system and the right personnel in place, managing the increased workflow associated with PI cases – and workflow in general – becomes a reality, Taking the time to implement a few simple steps will allow you to capitalize on the reimbursement of PI cases, which far exceeds any other third-party payer in most states. Leverage these systems to increase your efficiency and enjoy a busy practice without feeling constantly overwhelmed by the paperwork.

Dr. Jonathan Walker, a graduate of the University of Florida and Palmer College of Chiropractic - Florida, practices full time in Ocala, Fla. He is also the president of PI Marketing Elite and can be contacted with questions or comments at www.pimarketingelite.com.