Insurers Are Finally Figuring It Out

NBCE Fees Survey: The Results Are In

Many, if not most whiplash victims treated by chiropractors either fully recover or at least are left with relatively manageable conditions. What's more, the cost of treatment rarely exceeds $10,000 and is usually much less.

In contrast, patients who are treated through more traditional channels frequently are passed from doctor to doctor without much success and without managerial continuity. Failing to recover with medication and a brief series of physical therapy treatments, most patients quietly give up and live with their pain.

Those with more severe complaints often are passed off to pain clinics and subjected to a number of diagnostic blocks. After this is usually a series of epidural steroid injections, often to cervical and lumbar regions. Eventually a discogram is performed, which identifies a surgical lesion and surgery is undertaken. With disturbing frequency, the first surgery fails and a second is undertaken; sometimes a third. 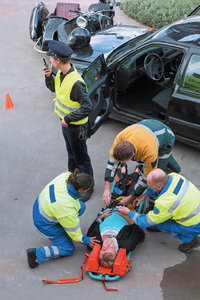 The final cost is stunning. In my region of the country (San Diego, Calif.), when all is said and done, the diagnostics blocks will (depending on the number of levels, etc.) typically cost about $14,000. The epidural steroids will be a bit more, especially when cervical and lumbar injections are given. The discogram will be in the $16,000-and-up range, depending on the number of levels. And in my experience, surgeons tend to charge extravagant fees in litigated cases, often in excess of $75,000.

I can't tell the reader how often this happens, and it is not my intention to deride the medical community. I am certainly not asked to see the success stories, so I see a biased caseload. But the exemplar described above is common enough that I deal with them on nearly a daily basis. Frequently, these folks have not received any chiropractic care.

Because chiropractors provide an efficacious treatment and at a reasonable cost, taking an active part might be seen as a virtual moral imperative. Getting paid simply requires a little information. This editorial offers some of that, and some suggestions for coping with the insurance industry.

The single most frequently cited justification by auto insurers for refusing to honor medical bills for treatment is that injuries are unlikely, uncommon or impossible in collisions in which the property damage is under $1,000 or so. This is, in fact, the basis of the MIST (minor impact, soft tissue) strategic business model applied by Allstate and other injurers. Health care providers and their patients face these policy-based denials more often than not when the responsible insurer is third party. 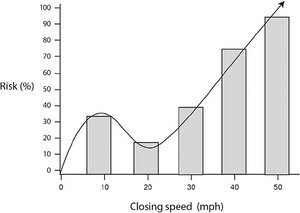 The risk curve is cubic, rising sharply up to the point where structural damage begins to occur, then dropping off due to the additional ride-down provided to the occupants, and then climbing again as crash speed increases. (Graph is for illustrative purposes only and does not reflect exact risk percentages or speeds.) Initially, we should recognize that there are two levels on which this problem can be approached. First, insurance coverage is supposed to be predicated on the premise that when some event (such as an auto collision resulting in injuries) occurs, medical benefits for treatment will be paid. It is not predicated on the probability of such an event occurring.

If I should ever be so unlucky as to be struck by lightning or bitten by a shark, I certainly wouldn't expect Blue Cross to deny medical coverage based on the prior odds of those things happening. Yet that is, in essence, what insurers are basing their denial upon in PI cases. The tacit extension, of course, can only be that the patient is lying about their injuries.

The other level, which is probably the easiest to work with, concerns the factual basis for the insurer's claims. Is it true that injuries are unlikely, uncommon or impossible under the conditions of minimal or near-zero property damage? Surprisingly, no. And it's counterintuitive, of course. In fact, at the transition where property damage begins to occur in slightly higher-speed collisions, the risk for injury actually dips down. (See graph, which is for illustrative purposes only, above.)

A general understanding of collision mechanics goes a long way to explain this seeming paradox. Without delving into too much depth here, the vehicle is relatively stiff in lower-speed ranges: it does not undergo crush or mechanical deformation here. Much of the kinetic energy of the collision is used to accelerate the vehicle and its occupant.

When the speed of the crash is high enough that the bumper energy absorber, bumper reinforcing bar, struts, or even frame elements are damaged, two things happen: (1) the kinetic energy used to deform these structures is no longer available to accelerate the vehicle; and (2) the duration of the collision is increased. And, since acceleration is equal to the change in velocity (delta V) divided by the time of the change in velocity (delta T), a relatively longer collision pulse translates into less acceleration.

I should add that this paradoxic risk curve inversion occurs only at the transitional speed range (about 8-12 mph) between no damage and initial damage speeds. As the collision speeds continue to increase beyond 20 mph, the risk curve will again begin to climb, even as the property damage becomes more severe. (See graph.)

How do we know this? In an important study of whiplash injuries undertaken by the Insurance Institute for Highway Safety (IIHS), investigators found that the largest group had little or no damage to the rear-struck victims' cars.1 I later looked at the entire English biomedical and engineering literature, beginning in the year 1970, for studies comparing crash severity (as measured by any reasonable metric) to any of three dependent variables: acute injury risk, severity of risk or the risk for poor outcome in low-velocity collisions.2 In this large meta-analysis, which had never before been undertaken, we applied standard methods of best-evidence synthesis and reported that there was no evidence for correlation.

Two clinico-epidemiological studies also shed important light on the question. Jakobsson, et al.,3 used pre-installed accelerometers in a fleet of vehicles to conduct a natural experiment and reported that the mean delta V at which whiplash injuries occurred was about 5 mph. More recently, a series of nearly 100 rear-impact whiplash injury cases were evaluated by looking at medical records and by conducting detailed reconstructions of the crashes in order to determine the delta V. The mean delta V in this study was 4 mph.

Human-subject crash testing has been conducted by a number of groups over the years.4-9 A careful reading of these studies reveals that in nearly all cases, no property damage was said to have occurred. This is actually by design, because in order to be able to draw conclusions about crash variables that we intentionally change from one crash test to the next (e.g., position of occupant, crash speed, head restraint position), it is imperative that the crash conditions which are not intended to be variable do not vary.

So, for example, if successive crash tests were causing progressive property damage, the mechanical property of the vehicle would be changing due to strain softening. This would confound the results, making interpretation difficult, if not impossible.

In the crash tests that I conducted over the course of eight years, we rarely observed any structural damage in rear-impact, bumper-to-bumper impacts at closing speeds of less than 10-12 mph, and in many cases we ran three or more tests without producing damage. So, collectively, we have a report from IIHS confirming that injuries are common in zero- or near-zero-damage rear-impact crashes; we have other independent studies that provide a mean delta V for rear-impact injury collisions of 4-5 mph; and we have several independent published crash-test studies confirming the fact that collisions producing speed changes in this range don't typically result in property damage.

In conclusion, there is no published evidence to support the claimed correlation between the three categories of risk and property damage in terms of low-speed, rear-impact collisions. There is, however, published evidence that there is no correlation.2 Practitioners faced with letters of denial from insurance companies have a number of options. They could offer to provide the claims person with this information. They could also inquire as to the source of the claims person's misinformation concerning risk and probability based on property damage. They could explain this to their patient so as to reassure them. And if the case is being litigated, they could provide this information to the attorney.

I will discuss human risk factors in another editorial; these also should always be considered when considering risk because, as it turns out, human factors are much more deterministic than crash metrics.