Recently, a national online news magazine came out with what may be developing into an annual event. For the third straight year, the magazine asked experts to rate diets.

In this case, 19 panelists ranked 29 diets for a number of categories including weight loss.1 Since every diet has supporters and only one can have the highest ranking, this exercise can start as many arguments as ranking the 29 cutest breeds of puppies. After I read what they had to say, rather than getting pulled into a food fight (pun intended), my thoughts centered on why we need so many diets and decided it was time for an obesity update.

Even though the American Medical Association reclassified obesity as a disease during its 2013 annual meeting (more on that next month), America's obesity explosion appears to have leveled off. In fact, the U.S. is no longer the fattest nation on Earth, having just been passed by Mexico. The bad news is that almost seven out of 10 adults in America need to lose weight. (See Tables 1 and 2.) The reason is simple – too many calories ingested, too few calories expended.

The BMI is fairly accurate for normal people. It is not as accurate for extremely short people or athletic people (heavy exercisers) of normal size, and completely inaccurate for those who are heavily muscled. BMI accuracy improves when used to compare large sample sizes.

I compiled Table 3 from information provided by the U.S. Department of Agriculture's Economic Research Service division. In a long and complex process, they use a series of inventory measurements, estimates and formulas to calculate the average calories per day Americans consume. This is not an exact science, nor do any of the authors and/or the USDA staff claim otherwise. But it is an excellent tool to compare ourselves with ourselves over time.

While the anti-fat and anti-carb crowds continue to blame each other for America's weight problem, the data shows that seven out of 10 Americans didn't become overweight from a single macronutrient. Nor will the problem be solved by a single macronutrient. The best chance for success is to tailor a program to fit a person's specific needs. This conflicts with the current model of having people conform to a program. 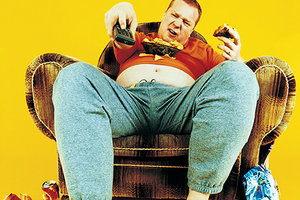 Insufficient activity is the other major factor in the fattening of America. In 2008, the U.S. Department of Health and Human Services published new exercise guidelines. Table 4 shows how many Americans meet the recommendations of 150 minutes a week of moderate intensity aerobic activity or 75 minutes of high-intensity aerobic activity and two days a week of strength exercise.