The Newest Public-Health Epidemic: Sitting Too Much, Moving Too Little

In my last column, I wrote about sitting versus standing at work. ("Sit or Stand? Strategies to Improve Workplace Health and Reduce Disease," Oct. 1 DC) I wrote the article from the perspective of an ergonomist. Partly due to rising health costs and the awareness that sitting for long periods has a negative effect on health, there is some significant motivation to get workers out of their chairs and on their feet. In addition to the stated health benefits, people tend to be more productive when they work on their feet.

Even the American Medical Association (AMA) recognizes that prolonged sitting is bad for you. The AMA recently adopted a new policy on sitting at work. It is now urging employers and others to make alternatives to sitting available to workers. AMA board member Dr. Patrice Harris said, "[giving] employees alternatives to sitting all day will help to create a healthier workforce."

There have been a couple of other articles about the same subject in DC recently, by Drs. Jeffrey Tucker and Jasper Sidhu. Each takes a somewhat different look at the issue of prolonged sitting. Dr. Tucker's column, "Sitting Is the New Smoking," appeared in the July 15 issue. Dr. Tucker makes the case that back pain is linked to prolonged periods of sitting.

Dr. Tucker looks at the issue of sitting from the perspective of someone who sees the "core" as a vital part of the equation. According to Dr. Tucker, sitting weakens the core muscles (which provides the force to stabilize and move the body) and contributes to the development and prolongation of back pain. I can't argue with that. Among other things, in addition to weakening the core muscles, sitting places a large amount of stress on the intervertebral discs in the lower back. 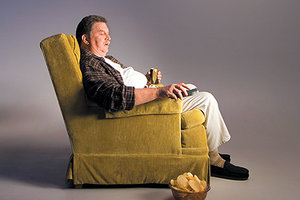 Dr. Tucker cites an article from Australia that was published in the British Journal of Sports Medicine (Veerman, et al., 2012).1 The Australian article compares the impact of smoking vs. sitting. According to the authors, each cigarette takes 11 minutes off your life. Sitting for one hour spent watching television (presumably while seated) takes 22 minutes off your life. Compared with people who don't watch TV, those who spend an average of six hours each day can expect to live 4.5 years less. In other words, sitting has a similar negative effect on our health to smoking cigarettes.

The authors of the Australian article looked at the sedentary lifestyle, in particular TV watching. They made a distinction between too much sitting and too little exercise. It wasn't just that TV watchers don't get enough exercise. Instead, it seems that sitting has an effect independent of the amount of exercise performed.

TV watching was the most commonly examined sedentary behavior, hence the focus on TV watching. I would argue that sitting at work has a similar impact on health. As an example, consider the office worker who sits at his/her desk for eight hours or more each day. After working in a seated position, he/she sits on the commute home, sits for dinner, and then sits during the evening hours while watching television. If you total the amount of time spent seated, it's staggering.

Continuing along this line, Dr. Sidhu's article, "The Impact of Slouched Sitting: A Review of the Recent Literature," appears in the Aug. 1 edition of DC. It provides a variety of references about the effect of sitting in a slumped posture. As with Dr. Tucker's article, it makes good reading. Additionally, there are some valuable references provided.

A Nation of Obese Sitters

So, is sitting a healthy thing to do? It would appear not! At least not for long periods of time. In spite of significant evidence, the plain fact is we have become a nation of sitters. We sit at work, sit on the way to and from work, sit while we eat, and sit during the evening while watching TV. Among some of the other negative aspects of prolonged sitting, there is a correlation between the amount of time spent seated and the development of obesity. It's really no wonder we are becoming a nation of obese sitters.

In addition to its recent policy on sitting at work, the AMA just saw fit to make obesity a disease, rather than a lifestyle choice. Interesting call! On a personal note, I've considered myself to be far too short for my weight most of my life. However, I don't consider that I have a disease; never have. Rather, I credit my own situation to more calories going in than going out. Labeling obesity as a "disease" sort of takes the personal-responsibility part out of the equation.

So, back to the sitting thing. There is ample evidence that sitting, whether at work or at home watching TV, has a negative effect. Studies show that prolonged sitting leads to an increase in childhood obesity, diabetes and even attention problems.

An interesting study was published a few years ago in the Archives of Internal Medicine (Ostbye, et al., 2007).2 The study was conducted at Duke University and looked at the impact of obesity on worker's compensation costs. Workers with a body mass index (BMI) greater than 40, filed twice as many worker's compensation claims, had seven times higher medical costs, and lost 13 times more time from work when compared to non-obese workers.

If we put these studies together, it would appear that sitting, whether at work or at home while watching TV, contributes to obesity and shortens life expectancy. Also, since obesity has been shown to increase worker's compensation costs, sitting has a direct impact on the workplace.

In an attempt to curb the sitting epidemic, the American Heart Association (AHA) is promoting a new device. It's actually a smartphone app, Hotseat. It is designed to do one thing: Get people out of their seats for a few minutes throughout the day.

I'm not in the habit of promoting products, but this one has me intrigued. A pilot study by the AHA found that 71 percent of the app users took more breaks from sitting during the workday. Additionally, nearly 87 percent of the workers said that using the app made them more aware of the time they spend sitting.

Those using Hotseat set up an individual break profile, one that they feel comfortable and capable of doing. They then set up the number of breaks they want to take and when they want to take them. Each break is approximately two minutes in length. Rather than a fixed schedule, the app syncs the breaks with the worker's calendar. Nifty use of a smartphone. Fran Melmed, the creator of the Hotseat app, says it is designed to combat "sitting disease."

One other thing that seems to help is the treadmill desk. I wrote about this in my earlier article, but it's important to re-emphasize, because it does get people out of their chairs. The treadmill desk consists of a treadmill that is set up as a standing workstation.

Perhaps the most important thing we can advise our patients to do is to move more. Don't spend too long in any one position. Take the stairs rather than the elevator. Park far enough away from the store that you are forced to walk a bit. Take walks after lunch and dinner.

I'm always amused when a worker who has injured his/her back is given a temporary work assignment that involves seated work. The opportunity to sit at work is considered to be "light work." In reality, it comes with its own price.

I'm personally pleased to see the interest in the negative effects of sitting. Prolonged sitting leads to a variety of health problems, from obesity to back pain to postural fatigue. It behooves chiropractors, as health professionals and wellness practitioners, to encourage our patients to move around more.