Educating the Growing Hispanic Population About the Value of Chiropractic Care

Chiropractic was given the spotlight on the largest and highest-rated Hispanic television network in the U.S., Univision, as it debuted its newest health program, "Cita Con Tu Salud" ("Appointment With Your Health"), an original 30-minute weekly health series aimed at educating Hispanics of all age ranges about health topics affecting their community.

Dr. Fabrizio Mancini, president emeritus of Parker University, made a special appearance on the show on Oct. 27 to participate in a segment on chronic pain and to help explain why chiropractic works when traditional medicine fails.

"With the Hispanic population being one of the largest in the U.S., it makes sense to begin to inform them as to why chiropractic is the best option," said Dr. Mancini, who has also done health segments for the past seven years on CNN Español, which has 38 million viewers in Latin America.

Earlier this year, producers for the Univision show asked Dr. Mancini if they could send a film crew to video and interview him and one of his recent patients who'd experienced great results with chiropractic. The Univision camera crew taped a typical visit at Dr. Mancini's office, and later asked the patient questions regarding her condition and how chiropractic had helped her. Dr. Mancini then taped his segment at the show's studio in Miami the following day.

In the segment, both the president of a local chronic pain association and a medical doctor were asked to explain chronic pain and some of the typical treatments for it. Then the video of Dr. Mancini's patient was shown and Dr. Mancini was asked to share how chiropractic's approach is different and some of the technologies used to support the chiropractic adjustment. 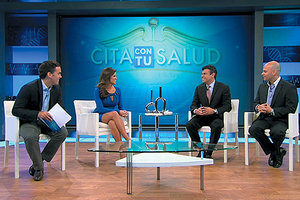 Dr. Mancini (second from right) with show hosts Enrique Acevedo and Pamela Silva Conde, and Chief Medical Correspondent, Dr. Juan Rivera (L-R). The segment was similar to the other television appearances Dr. Mancini has made in the past year, such as his Feb. 23, 2013 appearance on "The Dr. Phil Show"and his April 23, 2013 appearance on "The Doctors" – except, of course, that his "Cita Con Tu Salud" segment was filmed in Spanish.

"Cita Con Tu Salud" is hosted by Enrique Acevedo and Pamela Silva Conde, along with Univision's chief medical correspondent, Dr. Juan Rivera. The show is designed to help viewers to better understand a wide variety of medical issues so they can take control of their health.

Dr. Mancini said the segment was a big hit and peaked the interest of many. "The medical doctors on the show were very receptive and agreed that chiropractic should be considered for chronic pain," he said.

The California Endowment, a private health foundation, is helping to support production of the first season of "Cita Con Tu Salud" as part of its "AsegÃºrate" ("Secure Yourself") campaign, which aims to increase awareness of the Affordable Care Act and enroll Hispanics in health insurance plans. 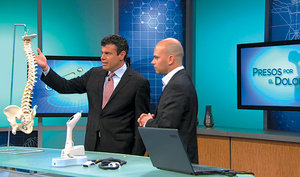 Dr. Mancini discussing the spine and chiropractic health with Dr. Rivera. U.S. Hispanics now number more than 50 million people and represent 56 percent of the growth in the U.S. population since 2000, according to the latest census. That growth rate is more than four times that of the non-Hispanic white population. The Hispanic population is also expected to triple by 2050, according to projections by the Pew Research Center.

Dr. Mancini said he has been trying to do his part in reaching this critical demographic by educating the Dallas / Fort Worth Hispanic community in radio and television segments promoting the value of chiropractic care. When he served as president of Parker University, Dr. Mancini also supported the growth of chiropractic as a profession in Mexico in various ways, including helping establish the chiropractic program at Universidad Estatal Del Valle de Ecatepec – the first institution in the world to offer a Spanish-taught chiropractic program; and providing interns from Parker to work at hospitals and the local university serving that community.

The key is for chiropractors to recognize the importance of this growing population to the growth and future of their practices, he said, especially if they work in large, metropolitan areas where the Hispanic population is soaring.

"Communicating our message to the masses is the key in growing our profession. People are looking for answers, and we have them. We are safe, conservative, preventative and we get results. Reach out to your Hispanic community. Learn a few sentences in Spanish so you can connect with them in a more authentic and personal way," said Dr. Mancini.