Trends 2022: Your Recipe for Success

I recently had a male high-school senior come in who was having some patellofemoral pain, as well as some distal iliotibial band (ITB) pain. He had just started end-of-summer training to play high-school football.

He was running during one of the practices with the team at the school when he fell on the outside of his right knee and collided with another player. His evaluation did not show any ligament laxity in his main knee ligaments (MCL, LCL, ACL and PCL), nor did he exhibit signs of meniscus involvement (negative Thessaley).

He has a history of Osgood-Schlatter disease in his right knee from his earlier high-school days. The Osgood-Schlatter did not bother him prior to this season. The patient did complain of increased soreness and discomfort when I palpated his patellar tendon, and I felt the bony deposit (bump) on his tibial tuberosity (which was also very uncomfortable to the touch). He also had tenderness with palpation around the medial aspect of his patellofemoral joint.

Keep in mind this was the first time he had really started to go "all out" and play at game speed all summer long. I wouldn't say the kid was deconditioned, but he had been away for the past several weeks at summer camp. I think athletic kids and their coaches don't always realize they may not be fully prepared for "all out" play upon returning to school after summer break. 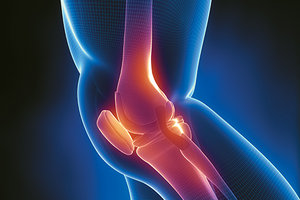 After performing an injury evaluation to the knee, I went ahead and performed a Selective Functional Movement Assessment (SFMA). The cervical, shoulder, thoracic and lumbar testing was unremarkable. His hands-held-overhead squat assessment revealed excessive forward lean of the torso, both feet rotating outward, and slight knee valgus (inward). His single-leg squat assessment showed knee valgus and foot flattening.

During his active and passive ROM assessment, I noticed a significant lack of ROM in both ankles during dorsiflexion. He also exhibited tibial internal rotation during passive dorsiflexion.

Sarcevic (2008)1 did a study in regards to the relationship between limitations in ankle dorsiflexion and the occurrence of Morbus Osgood-Schlatter (MOS) in children participating in athletic activities. The subjects for this particular study were 45 children, all of whom had been clinically diagnosed with MOS. Forty subjects were boys ranging from 11-14 years of age; five subjects were girls ranging from 10-12 years of age.

Sarcevic defines MOS as a "traction apophysitis of the tibial tubercle caused by repetitive strain, as well as a chronic avulsion of the secondary ossification center."1 Running, cutting, and jumping are common activities that increase symptoms. It is believed that the main cause of this occurrence is the strong, chronic pull of the quadriceps during athletic activities. This is consistent with the cases of Osgood-Schlatter I have seen, because I find they are helped with flexibility training for the tight hamstrings and quadriceps, along with ankle dorsiflexion mobility drills.

The quadriceps muscle group eccentrically decelerates the lower leg during the stance / support phase of the running gait. Limitations in ankle dorsiflexion have been associated with pronation of the foot, internal rotation of the tibia and an increase in knee flexion.1 The combination of these motion disturbances and the presence of limitations in ankle dorsiflexion may create an increase in shear stress on the quadriceps tendon / patellar tendon during the act of running.

Limitations in dorsiflexion can be attributed to overactivity in the gastrocsoleus complex. These movement compensations can be observed during the overhead squat and single-leg squat assessments when we see the heels raise off the floor, the feet externally rotate or the knees move inward (the center of the patella moves inward of the big toe). The correlation Sarcevic makes with this study between limited dorsiflexion and the presence of MOS can lead the practitioner to identify and address overactivity in the gastrocsoleus complex.

It is important to mobilize the ankle and inhibit the gastrocsoleus using hands-on soft-tissue procedures, as well as teach the patient how to use the foam roll and similar devices to perform at-home self-myofascial release. Lengthening exercises of the gastrocsoleus, peroneals, hamstrings and quadriceps muscles should also be taught to the patient as part of the rehab strategy.

I have a lot of hands-on experience performing myofascial release using my hands, as well as instrument-assisted soft-tissue therapy such as the deep-muscle stimulator, pulse therapy (radial shockwave therapy), and soft-tissue scraping tools. The combination of these tools is very useful in my practice. If you have a class IV laser with a trackball on top of these tools, your practice life will be easier and your patients will appreciate this.

Immediately following fascial release, static stretching and/or PNF stretches should be performed to lengthen the just-released muscles (Clark and Lucett, 2011).2 This reinforces the concept that conditions such as Morbus Osgood-Schlatter should not only focus on a localized area, but also address dysfunction affecting the entire kinetic chain.

Here is an example of another patient with a "weak knee": a 25-year-old male whose patella visually looked displaced laterally. He stated that he recalls his first knee injury occurring around age 15. He was running on a trail and fell about 2-3 feet from the ground, landing directly on the kneecap, which caused the patella to move laterally. He went to a chiropractor to have them "put it back in place."

The patient stated that it was "out of place for quite a long time." He re-injured it again snowboarding when he was in his late teens. He described a feeling of "instability" every time he runs faster than about 60-70 percent of full speed, especially with any lateral twisting.

The vastus lateralis (LVO) and IT band were tight, and there was muscle atrophy of the vastus medialis (MVO). Just flexing his quad caused his patella to drift laterally. The affected leg was visibly smaller on the MVO than the non-affected leg. The MVO seemed to be firing improperly (timing issues).

I began by using my hands to feel for connective-tissue adhesions, scar tissue, joint restrictions, etc. I further evaluated the fascia using a massage device with negative pressure (pulling away from the skin). This method is called "fascial traction" and revealed asymmetry that I was not able to palpate with my hands around the ankle, leg and knee.

I also used a radial shockwave device to loosen up the LVO and IT band attachments at the knee. The TFL at the knee had a lot of dense and taut tissue that needed breaking up.

My rational for the above starting place is that I check and correct mobility issues first. Thinking of the kinetic-chain linkage, it was important to provide fascial release to the overactive adductors, rectus femoris, vastus group, TFL / ITB, biceps femoris, semitendinosis, semimenbranous, soleus, and gastroc muscles. Once I did my treatment procedures in the office, I taught him how to perform fascial release at home using the foam roll and similar tools. I also showed him how to perform stretches for each of the muscles that were overactive in the fascial chain. I try not to miss this step in my rehab programs, because this is something patients need to do at home.

These are some of the common overactive connective-tissue fascial kinetic-chain linkages to check: peroneals to ITB / TFL, ITB / TFL to lateral glutes, lateral glutes to quadratus lumborum and obliques, obliques to the opposite pecs and shoulder.

After the self-myofascial release and lengthening lesson, I showed him the strengthening exercise: lying supine with one leg bent and the affected leg straight and slightly externally rotating the thigh; then lifting the locked and straight knee to the ceiling. I also spent time showing him the correct way to hip hinge and start doing squats.

On the third session with this patient, I also took the time to check for pronation and/or flat feet, which was apparent. I feel fortunate that I have an objective system in my office to determine the need for orthotics. I am able to show the patient what I see and can demonstrate if there is a need for orthotics to my patients.

On the fourth session, I taught him how to strengthen the VMO (squeezing a ball between the legs), activate the glutes (bridges, side-lying hip abduction and band resistance walks), and do further soft-tissue therapy to the ITB. We started doing some single-leg-stance work on stability pads, and step-downs with proper knee tracking.

After all these years, I still like squats and lunges, and I try to make it a goal that most patients perform these exercises. With all the talk about functional training and that you shouldn't have to break down movement patterns, every now and then I still find it beneficial to break down a dysfunctional movement pattern before attempting to restore a functional movement pattern. In other words, it's OK to perform inner-range squats to 40 degrees, work the glutes side-lying on the floor before standing, and practice control of the knee alignment while stepping up and down on a 6-inch step.