Applauding a Legacy of Leadership

A Moment of Silence for Dr. John Miller

Dr. Miller served as Palmer West's first president from 1980-1991 after Palmer College acquired Northern California College of Chiropractic. At his appointment, Dr. Miller emphasized his belief that doctors of chiropractic are primary-care providers and that chiropractic colleges should help prepare graduates for that important role:

"Chiropractic's primary-care, portal-of-entry position means providing our nation's D.C.s with training in chiropractic public health, chiropractic education, and chiropractic research; as well as the ability to serve in administrative health systems; e.g., HMOs, NIH, Armed Forces, etc. ... This means that chiropractic colleges must become multi-purpose: they must educate and train doctors of chiropractic for roles other than field practice." 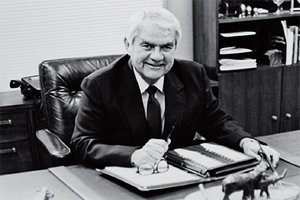 Dr. Miller in his office on the founding Palmer West campus in Sunnyvale, Calif. "John Miller had a major impact on Palmer's San Jose campus," said Bill Meeker, DC, MPH, current president of Palmer West, who served as associate dean of research during much of Dr. Miller's tenure as president. ... [He] brought expertise in accreditation, and under his leadership, Palmer's California branch campus was accredited by the CCE in record time."

"In addition to other programs that he initiated while president, Dr. Miller was a big supporter of the nascent chiropractic research community, and helped foster the original Pacific Consortium for Chiropractic Research in the late 1980s," Dr. Meeker added.

During his career, Dr. Miller was involved in the inclusion of chiropractic in Medicare, and the development of the CCE and the ACC, serving as association president (1987-1990), and council president (1990-1992).

Dr. Miller retired from chiropractic education in 1991, but his work to advance the chiropractic profession was far from over. With the Internet and Internet-based information resources in their relative infancy, he and his wife, Marlene, developed the Computer Information Exchange (CIE) in 1991. A year later, CIE brought the ChiroLink Intranet System online with the goal of "creating an effective information vehicle that might help to empower the chiropractic professional."

Continuing Dr. Miller's chiropractic legacy are son Craig and daughter Christine, both of whom graduated from Palmer West in 1985. Dr. Miller's other daughter, Kim, also served as director of public relations at Palmer West (1980-1984).