Is There a Neurological Basis and Correction for Macular Degeneration?

AMD is an idiopathic, degenerative condition that progressively affects the visual acuity of both eyes – primarily the macula, a small spot near the center of the retina that enhances sharp center vision. More than 11 million people are affected by some degree of AMD in the United States, with prevalence increasing annually.

There generally are two types of AMD: dry – defined as atrophic, which is the most predominant, accounting for approximately 90 percent of cases; and wet – having an exudative consistency.

What Causes AMD? The Prevailing Theories

Several theories exist as to the cause – a degenerative aging process is widely adopted, along with physiological distress of ocular blood supply, possibly due to cigarette smoking and/or insufficient blood flow from atherosclerotic changes of the appurtenant visual vascularities. Others contend that a restriction of nutritional aspects, such as vitamin C and/or other antioxidants, or even a chemical imbalance, may be causative factors.

My Own Theory on AMD: Atlas / Occiput Subluxation

However, in my opinion and supported by research in a clinical environment, the cause may be in fact be of a neurological nature, linked to prolonged structural neurological pressure occurring at the base of the skull (an occipital unilateral displacement on the atlas). 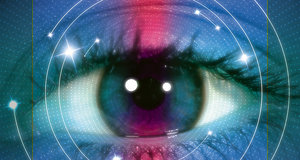 The occiput rests on the spinal segment commonly known as the atlas, and the two must bilaterally articulate together. However, if a unilateral, unequivocal displacement occurs and is sustained for a prolonged period of time, a distinct impingement of the suboccipital nerve roots at the base of the skull may occur. If it continues long term (multiple years), I suggest it may impact the visual cortex at the base of the cranium.

Macular deficiencies stem mostly from the visual cortex. This distinction of specific spinal pressure as described, resulting in sustained, long-term pressures and physical encroachment on the suboccipital nerve roots, appears to inhibit and reduce the nerve conduction impulses to the macula, eventually causing a direct impact on the visual cortex.

The visual cortex of the brain lies in the posterior-inferior sulcus of the cranium, just above the occiput / atlas articulating segments. If the affected spinal segments inflict long-term nerve encroachment on the suboccipital nerves, I believe this inhibits the neurological innervations of the appurtenant nerves supplying the visual cortex and the macula, which contributes to the macular degenerative process.

In my 38 years of clinical work, I have treated numerous patients diagnosed with macular degeneration, and determined that every patient also presented with a suboccipital displacement. The symptom similarities strongly suggest this degeneration process is caused by sustained neurological pressure, causing the appurtenant nerves to die. Once this occurs, regeneration of the nerve appears futile and focal blindness is the eventual result.

This type of structural displacement usually produces early subjective symptoms including multiple episodes of acute migraine headaches, sensations of pressure behind the eyes and sinuses, muscle fatigue in the neck, blurred vision, lightheadedness and occasional episodes of subjective vertigo. These are the predominant symptoms that may eventually reflect macular degeneration.

It is estimated that 80 percent of headaches are caused by this structural encroachment, and if left untreated for an extended period of time, may eventually leave the patient with debilitating various degrees of focal blindness resulting from the prolonged nerve-root damage.

If this perpetual subluxation of the occiput / atlas articulation remains for years or even decades, it appears to be a viable contributor to the long-term visual degenerative process. In my opinion, early detection and structural correction of the occiptal / atlas articulations are of distinct importance and may actually resolve the sustained nerve encroachment, reducing or even eliminating the debilitating effects of AMD.

Examination and treatment should be performed by a properly trained chiropractic physician to detect and determine the viability of the treatment protocol as it impacts the spine. A specific suboccipital manipulation properly seats the articulation of the occiput on the atlas, consisting of specific contacts between the occiput on the atlas in a decompression-traction maneuver:

In my experience, this removes the offending nerve-root pressure and restores normal nerve conduction. This should defer – and if caught in time, greatly eliminate – any degenerative processes affecting the macula and the visual cortex.

I strongly believe early detection plays an important role in managing this structural degenerative problem, and may be the preventative measure of choice that will eventually eliminate macular degeneration.

Dr. Gary V. Humphrey is a 1977 graduate of Pasadena College of Chiropractic. He has practiced for 38 years in California and now Winter Haven, Fla.